On November 9, Shanghai Forum on the Latest Development of the Belt and Road Initiative and International Commercial Arbitration of China Arbitration Week 2019 was held in Pudong Campus, SLU. The event was initiated by the university and Shanghai Sub-Commission of the China International Economic and Trade Arbitration Commission (CIETAC) and organized by the School of Law, SLU and the Center for Financial Law and Policy.

Gu Xiaomin congratulated the organizers on the convening of the forum, extended a warm welcome to the guests, and expressed heartfelt thanks to the sponsors for their strong support. Then she gave an overview of the university and the School of Law as well as their latest developments. On behalf of the faculty and students of SLU, she called on all sectors of society to continue to support and actively participate in SLU’s disciplinary development of finance law, tax law, international law and other related subjects, and to jointly train high-level legal professionals for the development of the five centers in Shanghai and the reform and innovation of the free trade zone. The roundtable discussion was presided over by He Jiawei, Vice President of Intelligeast (a legal-business oriented media platform) and President of Intelligeast College, and attended by Charles Guan, Managing Partner at Grandall Law Firm, and arbitrator at SHAC and SHIAC, ZhaiHao, part-time lawyer at Boss& Young Attorneys-at-Law, researcher at CFLP and former judge of Shanghai No.2 Intermediate People's Court, Zhang Wen, senior partner at HanSheng Law Offices in Shanghai, visiting professor at CFLP, Zhao Peng, lecturer at the School of Law, SLU, and Sun Hongtao, Associate Dean of the School of Economic Law at East China University of Political Science and Law, and arbitrator at SHIAC, who expressed their views on the latest development of the Belt and Road initiative and Shanghai International Arbitration Center. 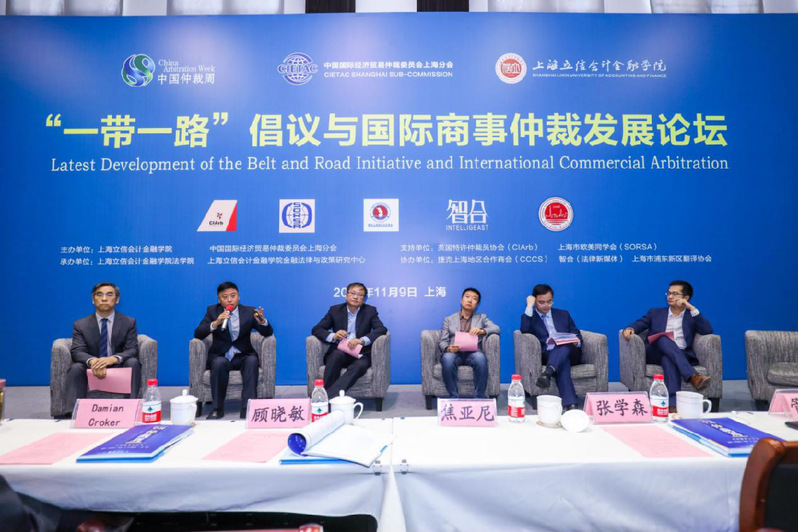 Finally, Wang Haifeng, Vice President of the Shanghai Arbitration Association, Director of the International Law Office, Shanghai Academy of Social Sciences Institute of Law, and arbitrator at CIETAC, SHAC, and SHIAC, made a summary of the forum and spoke highly of the success of it. She said that the forum was a very forward-looking, specific, and constructive one in that it not only further clarified the challenges for arbitration presented by the Belt and Road investment and possible countermeasures, but also raised the issue of tax dispute arbitration, which is rarely mentioned in the field of arbitration, and further discussed the use of new technologies such as artificial intelligence and blockchain in arbitration.

It is reported that the forum, as part of the China Arbitration Week 2019, was guided and supported by the CIArb, the SORSA, Czech-Shanghai Chamber of Commerce, Intelligeast, and Shanghai Pudong Translators Association.