Position：homepage  Join Us  Story and Comments

On Sunday, October 13, 2013, I was invited along with a group of SHFU staff and teachers on a day trip to Shanghai’s famous Chongming Island, the third largest oceanic landmass claimed by China. We jumped on the bus bright and early at 7 o’clock in the morning and started a two hour trek to the island. Driving to Chongming over the new(ish) suspension bridge actually didn’t take all that long, only about an hour, and the view across the river’s mouth as it opened onto the East China Sea is emblazoned in my memory, just as the rays of the early morning sun shone across the rolling waves of the inlet. Once we reached the island itself, however, it was still another hour-long drive to our first stop, serving to emphasize the enormity of the island. 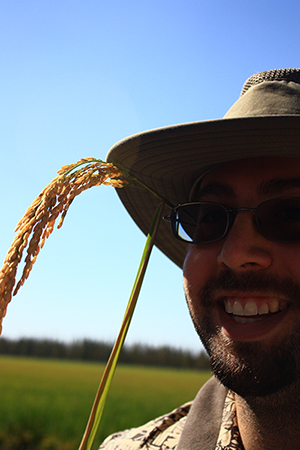 First stop on our ersatz tour was a visit to the Chongming headquarters of “Bright Rice”, a subsidiary of the Chinese GuangMing (光明) conglomerate which grows, harvests, and distributes rice throughout China. To be honest, the itinerary as laid out to me didn’t seem all that interesting. For years I’d heard of Chongming Island and the beautiful, natural landscape; how the Shanghai government plans to develop the island into a green and eco-friendly “village”. I was looking forward to seeing the wetlands and visiting other areas of natural surroundings, yet we were off to see a rice farm? It seemed a waste of time. My initial impression was strengthened when, upon arrival, we were ushered into a board room and given a lecture-like introduction to the company. I continued to wonder why we were wasting our time here. Fortunately, it turned out that my first impression was merely the product of impatience and a lack of imagination: our visit to Bright Rice turned out to be, for me, the highlight of our trip!

Coincidentally, we had arrived on the first day of harvest and were taken out to witness the harvesting process. As we were driven out to the rice fields a familiar pastoral scene reached my eyes. For a moment, I was catapulted back in time to my childhood – John Deere tractors and combines threshing through golden fields of wheat are a common sight in Kansas come Autumn. And here were my childhood memories come to life half a world away! Yet there were a few differences: the chest high fields of wheat were replaced by knee-length paddies of rice, and a lone farmer with his shiny combine had become a team of Chinese workers and several brand new machines. Still, it was remarkable to see such a familiar childhood scene transplanted through time and space! Our group snapped several pictures in the fields (as both Chinese and American tourists are wont to do on such occasions), and snagged a few stalks of rice as souvenirs (including the “Super Rice” that was introduced at the 2010 Shanghai World Expo!).

Our next few stops were just as eye-catching and fascinating, though not nearly as familiar to me. We spent some time touring the cold storage of Bright Rice, where a year’s supply of dried foods ranging from bay leaves to dates to mushrooms of all kinds sat in bags, boxes, and crates ready to be shipped throughout China. Each room was specially sealed and refrigerated and each had its own unique smell, ranging from sweet and enticing, to sharp and astringent. Subsequently we were given a tour of the apparatus which separated the rice grains from the stalks post-harvest. This was the most amazing part for me – a series of machines that not only removed the grains, shucked the casing and washed the rice, but also separated the individual grains by color and length (the darkest and shortest grains were sent to farmers as chicken feed) – all completely automated!

After leaving Bright Rice with a much different opinion than on arrival, the rest of the trip was much more like what I expected, yet in its own way, wholly satisfying. We visited Pearl Lake, and walked around to enjoy the fresh air and time away from the bustle of the city. While there a friend taught me how to fashion a flail out of a willow branch, and we had a chance to watch geese and black swans herded to and from the lake. This stop was the highlight of the day for the children in our group; they were running around feeding the swans and following them to and fro. I preferred observing their innocent play; a wholly refreshing activity, physically and spiritually, in and of itself.

Finally, we retired to an eco-village for dinner. QianWei Village is truly amazing – the entire community is run on green energy – wind, solar, and geo-thermal energy – and they grow their own organic vegetables for both personal consumption and sale. It’s a National AAAA Tourist Destination. There were even pictures of Hu Jintao’s visit to this village hanging on the walls of the restaurant, and, in the presence of such illustrious history, we enjoyed a phenomenal dinner of hairy crab, local fish and other freshly grown local produce. Quite a satisfying end to a phenomenal trip!

Though I truly enjoyed the experience, and more importantly the company of friends and colleague, above all, I learned that, especially in China, it’s best not to dismiss somethingthat on the surface seems strange to my “foreign” eyes(like a visit to a rice manufacturer), for I might just end up beyond surprised!